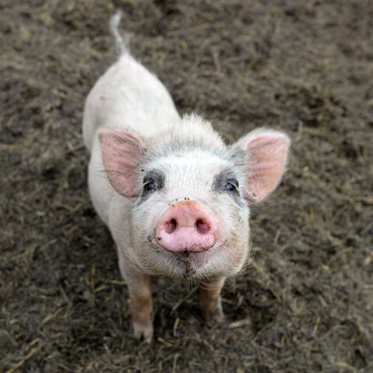 During August, 2004, my family and I had our holiday in the Philippines.  While there, I experienced, at first hand, the killing of a pig in honour of my 60th. birthday.  It was a disturbing experience, yet I felt compelled to write an account and this follows:

The poor pig made an ungainly entrance, tied to the top of a tricycle taxi.  For those who have never visited the Philippines, a tricycle taxi is a motor bike of about 100 c.c. capacity, with a sidecar, roughly constructed of welded metal tubes and panels. About five feet long two foot six inches wide and the top is about five feet six inches off the ground.  Seating is rough with two rows each capable of squeezing two people providing they did not mind being on rather intimate terms.  There are no doors or side panels, the passengers being required to hold on to the handrails.  On a practical though unadvisable basis, up to seven can squeeze into one of these crude sidecars, with two or even three further passengers riding side-saddle, on the seat of the motor bike while the driver sits astride the fuel tank.  The front passengers do have a plastic window to afford a view of the road ahead, but, with the gusts of wind blowing through the open sides, one’s eyes tend to be filled with dust from the poorly-maintained highway.

In Britain, these vehicles would never be allowed to travel on our roads, but, in the Philippines, motor tricycle taxis form the basis of affordable, public hire travel for the millions of ordinary people, costing only about two pence per kilometre.

As for the pig, it had been hauled onto the roof of the cab, its front legs tied under the roof, while the back legs hung down the rear of the cab, again tied to restrain the poor animal.  Removing it from this undignified position was not an easy task, the pig creating a great deal of noise in obvious complaint.  After a lot of effort, the pig seemed happy to walk along what could loosely be described as a road and into the front garden.  We were staying at the house of my wife’s parents in Central Abucayan, a small village about forty kilometres south of Cebu.  During our three and a half weeks holiday, my sixtieth birthday was due and my wife, Aleth, felt that we should have a big celebration to mark such a milestone.  I felt a little apprehensive, not only because I did not know what to expect, but also that I would be the one paying for everything and in the Philippines costs tend to be rather open-ended.

The pig was led to a small area at the side of the house, where it was tied to a wooden post.  A drink of water was given, but the animal was probably wondering why it received no food to satisfy its hunger.  For the rest of that day, the animal spent its time dozing and snorting, in complete ignorance of its impending fate.  As fans of ‘Eastenders’, we nicknamed the pig ‘Dirty Den’ until we discovered that it was female, after which it was renamed ‘Dirty Dot’.

Early next morning, Alejandro Juliane, a twenty-three year Filipino in charge of the pig, arrived.  He stayed with it and mid-morning, started his preparation.  With a length of rope, he swiftly threw it around the animal’s front legs, tying it tightly.  The screams from the pig were deafening, only interrupted by an occasional snort.  Even in this position, it tried to escape, but the restraining rope stopped it moving very far.  It fell on its side, its legs flailing wildly.  Alejandro waited until the pig had tired a little, although it was still screaming loudly, and then approached to tie the animal’s rear legs together.  Once he was satisfied that he had control, Alejandro untied the restraining rope and lifted the pig off the ground, which, in itself, was not an easy task, and carried it to a large wooden board raised off the ground by a wooden trestle. The pig was placed on its side, with its head near to the edge of the board. A bowl was placed on the ground and then everything was in place for the kill. The pig had not stopped screaming, the noise drowning out all other sounds.

Alejandro took a sharp pointed knife, about nine inches long, and carefully picking the right place, he plunged it swiftly into the unfortunate animal’s neck. Blood spurted from the wound and dripped into the waiting bowl.  The screaming did not stop immediately, but after a minute or two, the pig lay lifeless and silent.  Many people had been watching this spectacle, including my nine-year old son, James and five-year old daughter, Kimberley.  When asked if they wanted to watch, both were eager to see the killing, as it would probably be the only chance in their lives.  Thankfully, the experience did not turn my children into vegetarians.

Alejandro lifted the animal and carried it to the rear of the house where it was, again placed on a board. Bowls of cold water were poured over the carcass, followed by boiling water. This assisted the next task which was to shave all the hair off the pig’s body with the same knife used for the kill.  The spectators drifted away, allowing Alejandro to cut open the pig’s stomach and remove lungs, heart, liver, kidneys and intestines. Alejandro returned to the front of the house, where he constructed a roasting chamber out of wooden boards, placing wood charcoal inside. Once lighted, he skewered the animal on a bamboo pole about nine feet long and roughly stitched the stomach tissue together again.  Satisfied with the heat from the glowing embers, Alejandro lifted the pig over the fire with the bamboo skewer resting on the sides of the chamber. I was surprised to learn that the next phase was to pour a bottle of Sprite over the carcass, which, apparently, assisted in the tenderising process. For the next three hours, Alejandro, without any shade from the blistering sun, Patiently rolled the pig from side to side, ensuring an even roasting throughout.

Meanwhile, the living room had been transformed to accommodate as many people as possible, with a large table ready for the feast.  Many balloons and streamers were added to give a truly party atmosphere.  At last, the time had come for us to fill our hungry stomachs. The pig was carried, ceremoniously, on a huge metal plate and placed in the centre of the table. Briefly, I posed for photographs, holding the knife which had killed the pig with the point entering the flesh.  This same knife was used to cut chunks of meat from the carcass and, as celebrant, I was given the first mouthful of tasty pork.  This signalled to everyone else that they could now help themselves and, soon, a steady stream of my wife’s relatives reduced the pig to a mass of bones. Aleth was happy to eat the ears, which, to her, was a tasty, crunchy delicacy.  Large helpings of rice were available, together with a choice of drinks, which, in my case, was fruit juice.

Some of the pig’s internal organs would be stored for cooking later that week, with very little being wasted. Even the genital organs would be fed to children who suffer from speech impediments, the belief being that this will assist in their development.

The next day, Alejandro Returned to collect the plates he had provided, his all-important knife and to receive his payment.  His fee for all his effort was just two hundred pesos, which, at that time, was equivalent to two pounds. As a boy, he was unable to attend school as his parents had insufficient resources to afford his education. At twenty three, he was now using his earnings to pay for his own education, studying with mainly fifteen year-olds.  He shook my hand vigorously when I gave him his payment, plus a much-appreciated bonus.